Case Report: The Assessment of Traumatic Cervical Spine Injury and Utilization of Advanced Imaging in a Chiropractic Office.

Abstract: the objective is to explore the standard of care regarding the assessment of cervical spine injuries in a setting of a chiropractic office.  Diagnostic studies include physical examination, range of motion studies, orthopedic testing and cervical spine. MRI.

Introduction:  On January 30, 2017 a 49 year old female presented in my office to a second opinion examination at the request of her attorney.  She had been involved in a rear-end collision on 12/12/2015. (2) She was transported to a local hospital and arrived with complaints of headaches, disorientation, right-sided neck pain and right arm pain.  At the hospital emergency department CAT scan was taken of her brain, which proved to be negative. She received prescriptions of muscle relaxers and pain relievers and instructed to visit her primary care physician if her symptoms persisted.

She consulted a local Chiropractor on December 15, 2015.  The initial examination included the following from my review of the doctor’s notes: Presenting complaints were right-sided neck pain that radiates to the right arm.  The doctor’s records show a positive cervical compression test and a positive maximum cervical compression test.  Both produced pain bilaterally worse on the right.  Facet provocation tests were positive for facet disease.  Right side radicular pain pattern includes the trapezius and deltoid.  No x-ray studies were included in the doctor’s orders. The patient received 23 chiropractic treatments from 12/15/2015 through 4/5/2016 for a diagnosis of cervical sprain/strain.  The treatments consisted of spinal manipulation and a variety of soft tissue therapies.

Around January 15, 2017 I received a phone call from a local attorney regarding this patient and asking if I would do a second opinion examination on her due to persistent neck pain and right upper extremity pain.  The patient presented on January 30, 2017 for my evaluation.   My clinical findings are as follows:

Palpation: cervical spine palpation produced centralized spine pain that radiates to the right shoulder with numbness in the right arm and hand.

The patient informed me during the examination that her pain made it difficult to sleep through the night.  If she was on her right side her right arm and hand would go numb immediately.  A big part of this patient’s life was riding and caring for her horse and she could not do either because it resulted in severe neck and arm pain.

My recommendation to her and her attorney was to obtain a cervical spine MRI with a 1.5 Tesla machine due to the high quality images it can produce. MRI is a highly sensitive tool to evaluation of neurologic tissue including the spinal cord and nerve roots. (1) I bypassed the x-ray at this time due to the clinical presentation and 12% of spinal cord with injuries having no radiographic abnormality. (3) 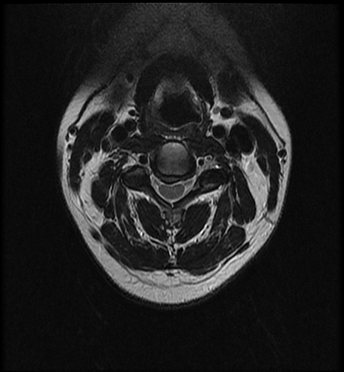 Discussion: When the patient returned to a consultation on the MRI findings my recommendation was to consult a neurosurgeon. (3) Her attorney asked me if the treating doctor acted incompetently.  My only response was that I would have ordered the MRI immediately before treating the patient with manual manipulation.  The case is likely to go to trial and there is a good chance that I will be called in as an expert witness.  It is almost a guarantee that the defense attorney will ask me if I would have treated the patient for such a long period of time without an MRI or whether the treating doctor could have made the problem worse.  The failure to accurately determine a diagnosis may result in malpractice action or a board hearing or both for this treating doctor and I would have ordered the MRI immediately considering the radicular findings and symptoms.  After any myelopathic or significant radiculopathic symptoms a referral of advanced imaging needs to be performed in order to conclude and accurate diagnosis, prognosis and treatment plan prior to rendering care.  Diagnostic appropriateness in the case of traumatic injury or with any etiology with neurologic symptoms or findings necessitates following triage protocols.  In this case, an immediate 2-3mm MRI of the cervical spine is clinically indicated and proved integral to the safe care of this patient.

After being involved in an automobile accident, many victims frequently report neck or back pain due to damage, injury or aggravated conditions resulting from the incident. There’s a variety of treatments available to treat some of the most common auto injuries, including alternative treatment options. Conservative care, for instance, is a treatment approach which doesn’t involve surgical interventions. Chiropractic care is a safe and effective treatment options which focuses on naturally restoring the original dignity of the spine after an individual suffered an automobile accident injury.

Chiropractic Can Tune Up The Brain