Build A Healthy Meal That Actually Keeps You Full 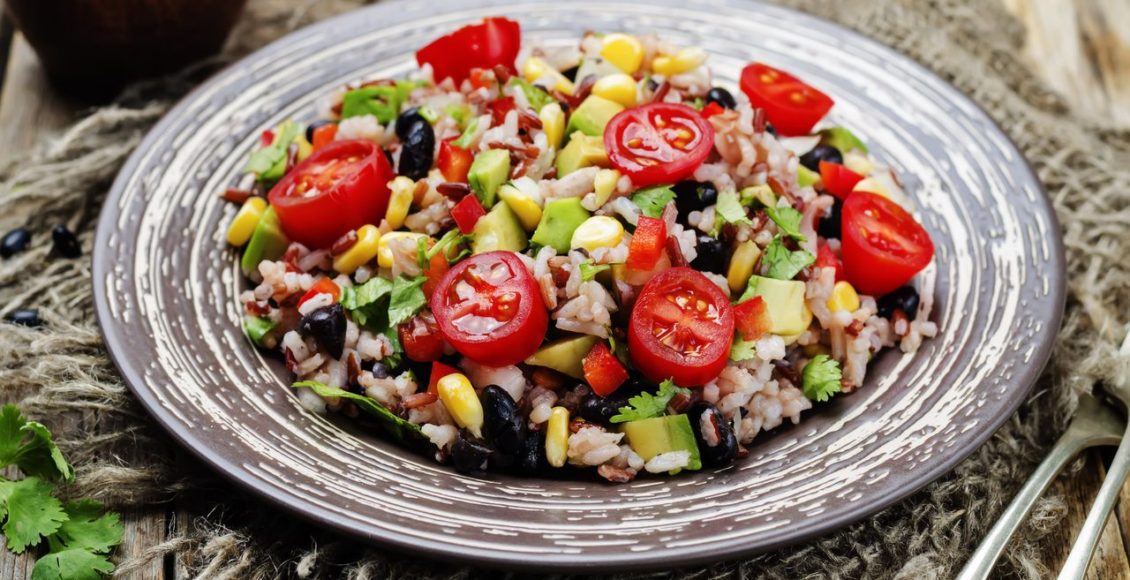 Do you ever eat a healthy lunch only to find yourself starving by 3 p.m.? You’re not alone. This a common frustration I hear from my clients, and in most cases, the explanation is the same: The meal was missing at least one key element that plays a major role in satiety, satisfaction, and energy. Luckily there’s an easy fix: Use my simple formula for crafting meals that stave off hunger—but don’t leave you feeling over-stuffed or sluggish. I’ve also included five simple examples that fit the bill below.

I highly recommend working veggies into every meal (even breakfast!). They’re nutritious, full of antioxidants, provide very few calories per portion, and are packed with fiber—which is filling because it takes up space in your digestive system. Fiber also slows digestion, which means you’ll have a steadier supply of energy over a longer period of time.

For breakfast, veggies can be added to an omelet, whipped into a smoothie, or eaten as a side. Many of my clients even enjoy salad at breakfast (dressed with citrus vinaigrette), or a serving of raw veggies that act as a palate cleanser at the end of the meal. All veggies provide some fiber, but a few top sources include artichokes, broccoli, Brussels sprouts, cauliflower, and kale.

RELATED: What is Clean Eating?

Aside from boosting metabolism, lean protein also wards off hunger better than carbs and fat, according to research. Be sure to include a lean source (think eggs, seafood, poultry, or Greek yogurt) in each meal. If you’re vegan, reach for pulses—the umbrella term for lentils, beans, and peas, like chickpeas and black eyed peas.

There’s no doubt about it: Fat is satiating. If you’ve ever eaten a salad with fat-free dressing versus one with olive oil, you’ve experienced the difference. Plus, the notion that eating fat makes you fat is seriously outdated. I tell my clients to include a healthy source in every meal. My favorites are avocados, nuts and seed (including ground-up versions like almond butter and tahini), extra virgin olive oil, Mediterranean olives, olive tapenade, and pestos made with EVOO and nuts or seeds.

By now you probably know that eating a low-fat blueberry muffin for breakfast isn’t exactly good for you. But did you realize it will likely leave your stomach grumbling an hour later despite the whopping 400 calorie count? That’s because refined carbs and sugar cause a spurge in blood glucose that triggers a quick insulin response; the insulin spike then results in a drop in blood sugar, which means the return of hunger pangs.

But, that doesn’t mean you need to nix carbs altogether. Just opt for a small portion of a fiber-packed, whole food source. Good choices include whole grains like oats or quinoa, starchy veggies like skin-on potatoes and squash, fresh fruit, and pulses.

Start with a small serving—around half a cup (or the size of half a tennis ball)—and up your intake depending on your body’s fuel needs. In other words, if you spend most of your hours sitting at a desk, a half cup is probably fine. But if you have an active day ahead, bump up the carbs a bit.

5. Be generous with herbs and spices

Natural herbs and spices are another category of satiety enhancers. I’m talking fresh or dried basil, cilantro, oregano, rosemary, garlic, ginger, cinnamon, turmeric, cumin, zest, and pepper. Even vinegars like balsamic, and hot peppers like chili or jalapeno, count. Use them to add aroma and flavor, and raise your satisfaction level at each meal.

RELATED: You Should Probably Be Eating More Turmeric. Here’s How

Now you may be wondering what a “complete” meal that follows all five rules would actually look like. If so, here are five examples of easy, stick-to-your-ribs, energizing dishes:

Sauté Brussels sprouts in low-sodium vegetable broth, along with more of your favorite veggies like onion and grape tomatoes, along with seasonings, such as a dried Italian herb mix, turmeric, and black pepper. Add one whole egg and three to four whites or one whole egg and three quarters cup whites to scramble. Serve over a half-cup of lentils, topped with half of a sliced avocado.

Brown about four ounces of extra-lean ground turkey and set aside. Sauté broccoli florets and other veggie faves like bell pepper and mushrooms in low-sodium vegetable broth with minced garlic, fresh grated ginger, and minced chili pepper. Add the turkey back in to re-heat, serve over a small scoop of brown or wild rice, and top with sliced almonds.

RELATED: How to Buy Healthy Food Without Looking at the Nutrition Label

Toss a handful of minced kale with a chopped hard boiled egg and three whites. Fold in a tablespoon of dairy-free pesto and mix with a half cup of chickpeas.

Sauté cauliflower and spinach in low-sodium vegetable broth, seasoned with minced garlic and fresh cilantro. Serve with small scoops of black beans and brown rice, topped with a dollop of guacamole and wedges of fresh lime.

10 Reasons Your Belly Fat Is Not Going Away