I Survived the Master Cleanse -Then Gained All the Weight Back | El Paso, TX Doctor Of Chiropractic

I Survived the Master Cleanse -Then Gained All the Weight Back 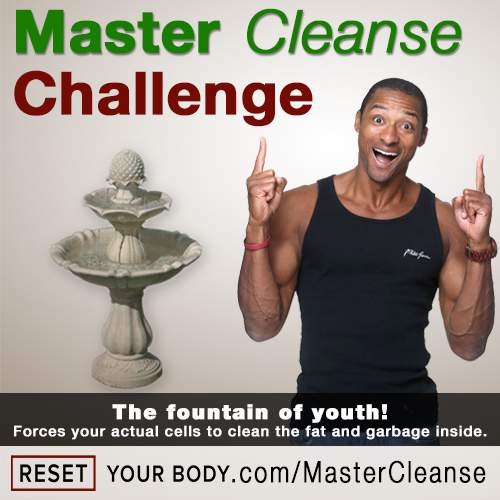 Last summer I voluntarily chose to stop eating for 10 days. I gave up solid foods as part of the Master Cleanse.

At 5’6″, I couldn’t budge my scale from around 140, no matter how many times I tried South Beach or Slim-Fast (and yes, I realize my desire to lose was more about vanity than health). A colleague told me he’d permanently shed 20 lbs. on the Master Cleanse, a very controversial liquid diet that helped Beyonce quickly slim down for her role in Dreamgirls. The no-solid-food rule sounded a little scary, but the thought of losing 10 lbs. fast was too tempting to resist. So I started poking around the Internet and found a surprising number of Master Cleanse tips—some useful (always stay near a bathroom) and some not (rub your belly to rid it of toxins).

I was ready to spend 10 days ingesting nothing but homemade lemonade. Here’s what happened:

Day 1: Every day I was supposed to guzzle 16 oz. of salt water in the morning, and sip a mug of hot laxative tea before bed. According to Google, this was supposed to eliminate years of waste accumulated in my body. That’s basically a fancy way of describing water-like diarrhea and killer stomachaches.

Day 2 I wasn’t as hungry as I expected to be and even felt more energized than normal. But that night I went to the movies and could smell my friend eating gummy worms two seats away. I had to sit on my hands so I didn’t reach over and steal some.

Day 3 Wanting to burn some extra calories, I spent the day walking around the city. Since you’re not eating anything on the cleanse, you’re not supposed to exercise—and I soon found out why. Feeling faint, I had to sit down on more than a few benches on my way home. “Are you insane?” my friend texted me mid-rest, begging me to stop.

Day 4: I woke up weighing 135—I’d finally broken my 140 plateau! Seeing the scale go down was exhilarating and addicting.

Day 5: Socially, it was an awkward week to cleanse. My colleagues and I were taking our new manager to lunch, and an old college professor wanted to have dinner. My new coworker asked if I wasn’t feeling well when I ordered a measly bowl of egg drop soup at a Chinese restaurant. Embarrassed by my no-solid-food streak, I faked an upset stomach.

That night my professor picked a steakhouse. After just two bites of steak and some asparagus, I realized there’s a reason you’re not supposed to eat solid foods while consuming all that laxative tea.

Next Page: Slipping on my skinny jeans

Day 6: I easily buttoned up a pair of skinny jeans that last fit when I was 18. I spent the majority of the day collecting recommendations for reputable tailors and vowing to do the cleanse seasonally.

Day 7: My tongue turned white a couple of days ago, which my Internet research said was normal. However, I wasn’t sure why it was normal because I’d never bothered to buy the Master Cleanse manual ($3-14; amazon.com). I wasn’t supposed to stop cleansing until it returned to its normal color, which generally happens on Day 7. But it hadn’t changed yet, so it didn’t look like I was going back to eating anytime soon.

Day 8: Many people on the Master Cleanse claim that by Day 8, they wake up feeling like a new person. I woke up feeling very moody and uncomfortable. Whoever said that Day 8 is enlightenment needs to be enlightened. My weight hadn’t changed and I was ready to eat my own hand.

Day 9: The scale didn’t budge again and my tongue was still white. Was I on a Master Cleanse plateau? I changed my mind about doing this four times per year.

Day 10: Sitting on my couch at 11 p.m., counting down the minutes until midnight, I looked down and noticed that my thighs had turned to jelly. While I’d lost weight all over—and had finally shed my tummy rolls—I hadn’t expected to lose so much muscle mass.

At 12:01 a.m., I gobbled down some chocolate chip cookies, even though my tongue was still white. Ten days is the recommended minimum for cleansing—some people can go up to 40 days—but since I wasn’t losing any more weight, it no longer seemed worth it.

The aftermath
While I managed to maintain my 10 lb. weight loss for a few months, it wasn’t long before I started indulging in foie gras and chocolate cake again—and regained all the weight. I never forgot the thrill of losing so many pounds so fast, so I attempted the Master Cleanse again a few months later. But three days in, I realized that I was going down a dangerous path, and I quit.

Still, short-term fasting can be a safe way to get back to healthy eating habits. But instead of lemon and maple syrup, I bought a juicer. After a really indulgent week, I stick with freshly made fruit and vegetable juices for a day or two.

I also made an appointment with a nutritionist to get my yo-yo dieting under control. Keri Glassman, RD, the owner of Nutritious Life, a nutrition counseling practice in New York City, has seen more than a few clients try multiple fad diets only to regain the weight, too. I now follow her simple rules:

It’s not a quick fix—and my progress takes a lot longer to show up on the scale—but it’s infinitely better than limiting myself to spicy lemonade.

The Best Way to Cure An Upset Stomach

Nutrition: Assessment of Vitamins & Minerals You Must Know