Whiplash has been difficult to study because its pathoanatomy has remained poorly known, however, the facet joints have been recently isolated as a site of pain in many people that are whiplash-injured.

In a typical rear-end collision, the occupant’s pelvis, chest, and head are hastened forward in rapid succession. The massive inertia of the head leads to a horizontal translation (retraction) of the initially stationary head relative to the forward-accelerating torso, and this movement induces compression, shear, and ultimately tension in the cervical spine.

Recent studies have localized the chronic pain of several whiplash patients to the facet joints. Subsequent experiments involving both human subjects and cadaveric cells have demonstrated that harm to the capsular ligaments may play a part in the pathoanatomy of whiplash injury.

The comprehension of injury mechanics begins with an appreciation of how individuals respond to the kinds of perturbations that create whiplash injury. Rear-end collisions, where an occupant’s vehicle is struck from behind and hastened forward, have been associated with an increased risk of whiplash injury and a higher frequency of symptoms compared to other crash directions. As a result, perturbations that simulate a collision have been used by most biomechanical experiments conducted to investigate whiplash injury. Many research groups have studied subjects exposed to whiplash perturbations, and despite differences in subjects, vehicles, seats, and the crashes used with these groups, a stereotyped reaction has been observed in normally seated subjects. 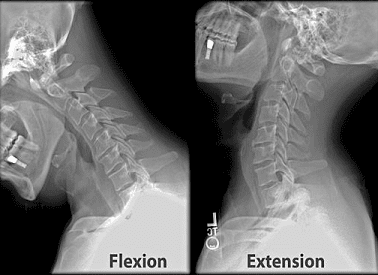 The pelvis is hastened forward, due to a combination of occupant posture and seat compliance, acceleration of the torso lags behind acceleration of the pelvis. This difference in motion between the pelvis and upper torso produces a small rotation of the torso and leads to an initial flexion of the neck, despite the fact that the head is still effectively stationary at this stage in the induced kinematic response. As the torso accelerates forward relative to the head, a horizontal translation develops between the base of the head and the spine, causing the lower vertebrae of the spine to extend. The horizontal shear stiffness of the upright spine is inadequate to overcome the rotational and transitional inertia of the head, and because of this, the upper cervical segments bend. The changing configuration of the vertebrae results in the cervical spine being better able to encourage horizontal forces, and these forces both accelerate the bottom of the skull forward and establish a rearward rotation (expansion) of the head. 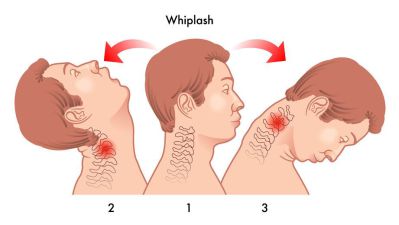 In the presence of a properly positioned head restraint, both the head extension angle and the horizontal translation between the torso and head (retraction) are arrested and reversed by the combination of an external force applied to the head from the head restraint and inner forces developed by both the ligamentous cervical spine and the reflex contraction of the cervical muscles.

After the interaction with the seat back and head restraint, the head and chest rebound forward. Forward torso motion could be limited by a seatbelt, whereas forward motion of the mind seems to be controlled by sustained activation of the posterior neck muscles.

Whiplash, among other automobile accident injuries, are frequently reported by victims of an auto collision, regardless of the severity and grade of the accident. The sheer force of an impact can cause damage or injury to the cervical spine, as well as to the rest of the spine. Whiplash is generally the result of an abrupt, back-and-forth jolt of the head and neck in any direction. Fortunately, a variety of treatments are available to treat automobile accident injuries. How To Spot The Critical Signs Of A Brain Aneurysm