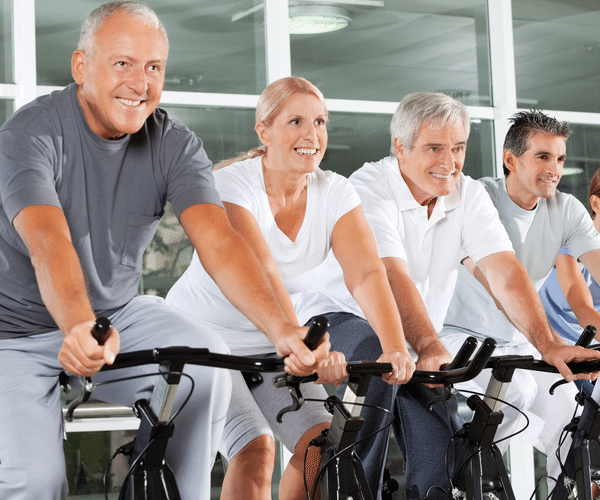 Men and women of a certain age realize quickly that their muscles diminish faster than they used to, and that muscles do not respond to exercise the way they used to. A new study shows that it’s all in the mitochondria — the part of the cell responsible for energy and vitality — and there is an exercise plan that can benefit the older crowd, even surpassing — surprisingly — benefits for the younger crowd.

Among various regimens of exercise, researchers found that interval training for a group older than 64 altered the working mechanisms in an amazing 400 genes — compared to only 274 for a group 30 or younger. The vitality in the older crowd’s cells responded more robustly than the younger crowd — adding another layer to the need for older folks to hit the gym.

Here’s how the experiment was conducted: 72 healthy but sedentary men and women were divided into two groups — 30 or younger, or older than 64 by researchers at the Mayo Clinic in Rochester, Minn. Their vitals were measured, including blood-sugar levels, gene activity, and mitochondrial health in their muscle cells. Then the volunteers were randomly assigned to 1 of 3 exercise regimens.

After 12 weeks, vitals were again checked for all involved. All exercise groups experienced improvements in fitness and blood sugar regulation.

Strength and endurance were affected differently, but predictively: The gains in muscle mass and strength were greater for those who exercised only with weights, while interval training had the strongest influence on endurance.

But biopsied muscle cell activity proved to be surprisingly different. Among the 30 and younger who went through interval training, the activity levels had changed in 274 genes, compared with 170 genes for those who exercised more moderately and 74 for the weightlifters. In the older crowd, almost 400 genes were working differently — more activley — for interval training, compared with 33 for the weightlifters and only 19 for the moderate exercisers.

Those who did the interval workouts showed increases in the number and health of their mitochondria. The takeaway: Interval training seems to be the best way to achieve vital cell health for muscle mass —particularly for those who are age 64 and older. Better muscle mass means a healthier, stronger body.

The decline in the cellular health of muscles associated with aging seemed corrected with interval exercise, especially if intense, Dr. Sreekumaran Nair, a professor of medicine and an endocrinologist at the Mayo Clinic and the study’s senior author, told The New York Times. Moreover, as his results show, older people’s cells responded in some ways more intensely than the cells of the younger group — suggesting, he says, it is never too late to benefit from exercise. Nair and his research team’s results were published in the journal Cell Metabolism.

Preparation & Training for a 10K Race

The Connection Between Nutrition & the Epigenome

Nutrigenomics and Traits Between Generations

The Importance Of Feeding Our Genes